Living in an age of techno gadgets like iPad, smartphones, powerful laptops and hexa core desktops, we easily forget where it all began. Here is a little look back at the good old days. 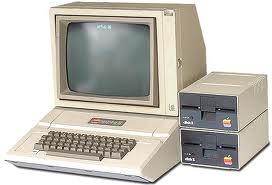 The Apple II series is a set of 8-bit home computers, one of the first highly successful mass-produced microcomputer products, designed primarily by Steve Wozniak, manufactured by Apple Computer (now Apple Inc.) and introduced in 1977. In terms of ease of use, features and expandability the Apple II was a major technological advancement over its predecessor, the Apple I. Introduced at the West Coast Computer Faire in 1977, the Apple II was among the first successful personal computers; it launched the Apple company into a successful business. Throughout the years, a number of models were sold, with the most popular model remaining relatively little changed into the 1990s. By the end of production in 1993, somewhere between five and six million Apple II series computers (including about 1.25 million Apple IIGS models) had been produced.

The original Apple II operating system was contained in ROM along with Integer BASIC. Programs were entered, then saved and loaded on cassette tape. When the Disk II was implemented in 1978 by Steve Wozniak, a Disk Operating System or DOS was commissioned. 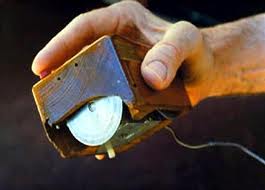 Yes, this was the first mouse invented. Douglas Engelbart at the Stanford Research Institute invented the first mouse prototype in 1963, with the assistance of his colleague Bill English. They christened the device the mouse as early models had a cord attached to the rear part of the device looking like a tail and generally resembling the common mouse. Engelbart never received any royalties for it, as his patent ran out before it became widely used in personal computers. The invention of the mouse was just a small part of Engelbart’s much larger project, aimed at augmenting human intellect. Bill English, builder of Engelbart’s original mouse, invented the ball mouse in 1972. 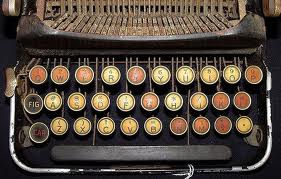 Keyboards were in existence for quite a while. There wasn’t much improvements made to the look of the keyboards. Here is a little history about the first type writer keyboards. The first keyboard was created by Christoper Scholes in 1873 to improve caligraphy. However, if a person typed too quickly the keys got stuck and the machine stopped working. To prevent this from happening, a QWERTY type keyboard was developed by Scholes to slow you down when you type. This style of keyboard became standard because later Remington – who were sewing machine manufactures at the time – used the QWERTY keyboard for the first typewriters, so as to appeal to existing users of Scholes machine. More people were forced to learn that particular system, and more companies began manufacturing those keyboards until it became the standard keyboard setting. 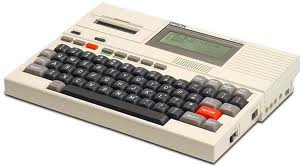 The Epson HX-20 (also known as the HC-20) is generally regarded as the first laptop computer, announced in November 1981, although first sold widely in 1983. Hailed by BusinessWeek magazine as the “fourth revolution in personal computing”, it is generally considered both the first notebook and handheld computer. With about the footprint of an A4 size page, the Epson HX-20 features a full-transit keyboard, rechargeable nickel-cadmium batteries, a built-in 120 × 32-pixel LCD (smaller than that on many mobile phones today) which allowed 4 lines of 20 characters, a calculator-size dot-matrix printer, the EPSON BASIC programming language, 16 kB RAM expandable to 32 kB and a built-in microcassette drive. 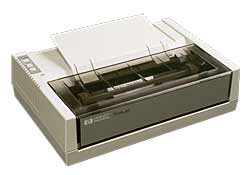 This small, rugged printer, dubbed ThinkJet for thermal inkjet, was introduced in 1984. Just as the HP-35 calculator replaced the manual slide rule forever, inkjet technology spelled the end for the noisy dot-matrix printer. Thermal inkjet technology developed at HP was introduced in a high-quality, low-price personal printer. It used a 12-nozzle head and was a text-only printer that needed special paper and wasn’t capable of producing photos. 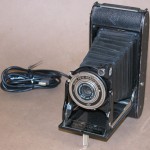 First employed in 1991, a webcam was pointed at the Trojan room coffee pot in the computer science department of Cambridge University. The webcam was created to help people working in other parts of the building avoid pointless trips to the coffee room by providing, on the user’s desktop computer, a live 128×128 grayscale picture of the state of the coffee pot. The camera was connected to the Internet in November 1993 by Daniel Gordon and Martyn Johnson. It therefore became visible to any Internet user and grew into a popular landmark of the early web. The camera was finally switched off on August 22, 2001. 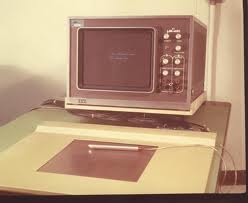 The RAND tablet, also called the Grafacon (for ‘Graphic Converter’) was one of the earliest tablet computers and sold for $18,000. ‘The attached stylus sensed electrical pulses relayed through a fine grid of conductors housed beneath the drawing surface,’ explains ComputerHistory.org. 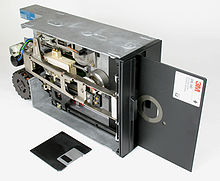 On the left is a picture of the large 8″ floppy disk drive. A 3.5″ is placed as a comparison. The earliest floppy disks, invented at IBM, were 8 inches in diameter. They became commercially available in 1971. In 1976 Shugart Associates introduced the first 5¼-inch FDD and associated media. In 1984, IBM introduced the 1.2 megabyte dual sided floppy disk along with its AT model. Although often used as backup storage, the high density floppy was not often used by software manufacturers for interchangeability. In 1986, IBM began to use the 720 kB double density 3.5″ microfloppy disk on its Convertible laptop computer. It introduced the so-called “1.44 MB” high density version with the PS/2 line.