If your CPU fan is making noise or simply won’t function anymore, it is time to replace the fan. A CPU fan is vital for keeping the heat sink cool. A malfunctioning CPU fan will cause various hardware in your computer to fail which will ultimately result in a costly equipment breakdown. This article will discuss how to find the right CPU replacement fan for your computer.

CPU fans come in various size and shapes and the replacement should match the one your computer currently uses. It is important that you purchase the correct CPU fan before replacing since the wrong one will further damage your system or simply won’t work. 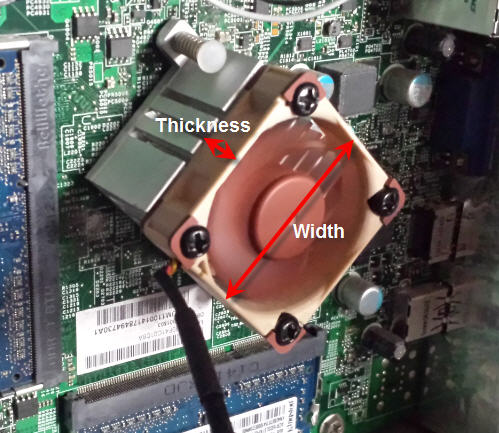 Voltage is Important for the CPU Replacement Fan

CPU fans run in different voltages. Your current CPU fan label will indicate the voltage it uses. Find out if it is 12V or 24V. Ensure the replacement fan has the right voltage to avoid electrical failure. In the picture below, you will notice that the voltage is 12V.

Check the Number of Pins for the Replacement CPU Fan

In order to have the right fit, your replacement CPU fan will require to have the same number of pins as your current CPU fan. Some CPU fans have 2 pins while others have 3 or 4 pins. Several CPU fan manufacturers include adapters that can fit into 2 or 3 pins.

The number of pins your CPU fan require can be identified by disconnecting your current CPU fan wire from the motherboard and looking at the connector. As shown in the picture above, the three openings in the connector indicates that the CPU fan consists of 3 pins. If your current CPU fan has two openings, then it will require a 2 pin replacement CPU fan. If you are not sure which pin to pick, buy a replacement fan which comes with adapters to accommodate multiple pin size.