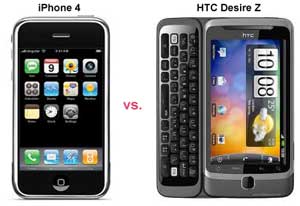 So, what does HTC Desire Z have that iPhone 4 doesn’t and vice versa? Here is a comparison between the two.

Storage:
iPhone 4 has a built in storage capacity of 16 or 32 GB with no memory slot. HTC has 1.5 GB internal storage which can be expanded through a microSD memory card.

GPS:
Both models feature a built in GPS receiver.

Thickness:
iPhone 4 has a lower thickness value which is 9.3 mm compared to HTC Desire Z which has 14.16mm thickness.